When it comes to street photography there are many choices out in today’s market. Remember there is no right or wrong. These cameras are just tools towards fulfilling our vision. Today, I took the Pentax K5 IIs to the streets of Downtown Miami where there are a multitude of worthy photographic scenes. The K5 performed flawlessly. The fact that it doesn’t have a Anti Alias filter I think brings a lot to the table. Images are sharp, crisp, and in my opinion, they have that full frame look, you know, that richness of the frame. Pentax got it right with the K5 IIS, the buttons are perfectly laid out, the grip is very ergonomic and just feels great despite this camera weighing in a little more than one may be used to from a different manufacturer. Exposure compensation and ISO have dedicated buttons right next to each other thus complementing, in my opinion, the two most used options in any camera.

Here’s a photoessay “Meeting Dale” where I had a chance to speak to Dale and document his craft. Dale fell of a 3 story building while helping a friend about 8 years ago. As a result of the injuries he suffered and the various surgeries the mobility in his arms was greatly diminished. He shared he can’t pick up objects that are more than 16 ounces ― the equivalent of a filled can of Coke. After his long recovery and therapy, he met someone that did this sort of arts & craft work but wanted to charge him $300 for those lessons. “Unbelievable,” said Dale. Homeless and without a penny to his name, Dale quickly took the streets of Downtown Miami and Bayfront Park and began his homeless journey. Lucky for him he said, he stumbled onto an arts & craft book at a used book store which closed years ago, purchased the book for a $1, and self taught himself this craft. The ornaments that Dale makes are made of leaves of palm trees which are plentiful in our community so there are always available and of course free. Dale makes ends meet by doing these ornaments to tourists and locals alike. The flower you see in the images was made for my Isabel.

Stay tuned for more images from the Pentax K5 IIs in a street photography setting. I just had to share these photos immediately. To be honest, I have not even looked at the other 300 frames, Dale’s frames were just calling out for me, it happens, some images are not meant to be “marinated.”

All photographs by Jorge Ledesma ― Pentax K5 IIs ― Pentax SMC-FA 31mm f/1.8 AL Limited ―  click on the images below to bring up the gallery view with exif data 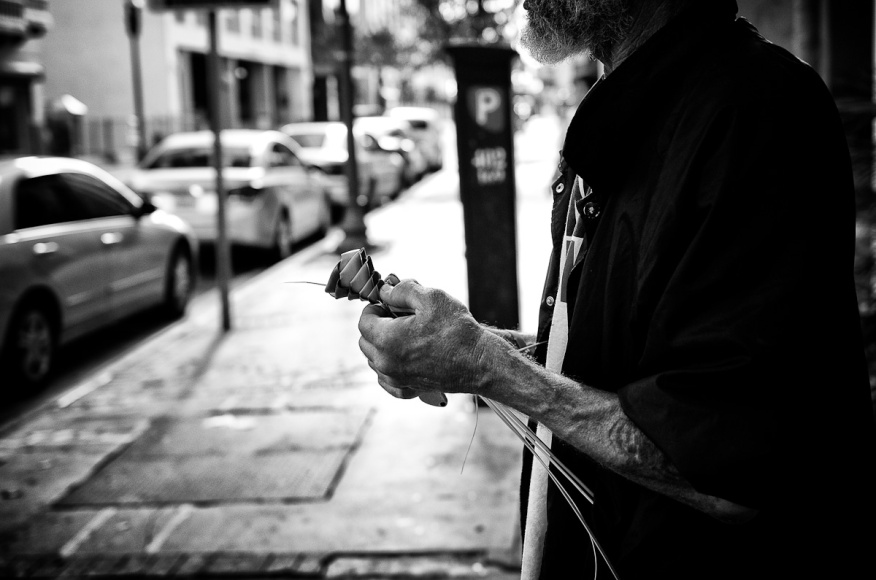